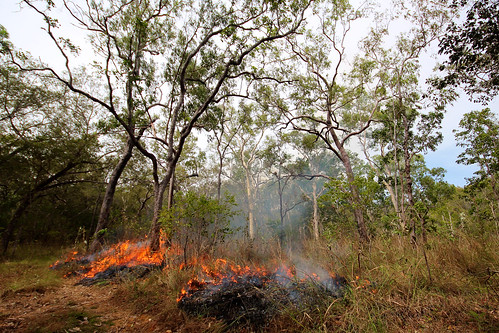 Given that it’s almost November, I figured this post was about due. It’s already heating up a lot in most of the country, and it’s only a matter of time til the heat sets in down here, too. And if there’s one thing that can be guaranteed to happen during an Australian summer, it’s fire.

I just looked at the State’s Country Fire Service page listing warnings and incidents. Just today – in the twelve or so hours since midnight – there’s been 21 incidents. Eight of them were fires – grass fires mostly, with one rubbish fire, one vehicle fire and one building fire reported. Eight fires. In October. We haven’t even hit the dog days of summer yet – the days where you sit back and hold your breath, praying that no one with careless fingers sets a match to anything or throws a cigarette butt out a car window.

I grew up in the Australian bush. Back when I was young, the cane farmers still burnt off the fields every year. One of our neighbours down the track a ways grew cane; some time between July and November, we’d hear the roar of the cane as it went up and watch the black ash threads settle over the landscape. On the right night you could look out over the paddocks and see a red glow on the horizon.

We burned our own paddocks too (and still do so). Low heat fires at the right time of year burn off the dead grass and some seedling trees, creating a potassium rich environment to fuel the new season’s growth. The fire will also help control some pest problems, as you break the breeding cycles. And last but not least, several native plant species will only sprout after a fire has been through.

One of the traditional methods of managing the Australian landscape is with fire. It’s been going on since long before the white man hit the scene. In fact, most of what people think of as “the bush” only grows that way because of the fire.  It’s why fire is so common – and so catastrophic when things go unmanaged.

One or other of my relatives has been the fire warden for the Gundiah district for almost as long as I can remember. And most of the adult males in the family have been, or still are, part of the rural fire brigade. I only remember two times that Dad was called out to a bushfire. Both times Mum became quiet and tense the whole time he was gone, an aura of worry creasing every line in her body.

The one I remember most clearly took a few days to get under control. I was about 10 at the time. Dad would come home tired and sweat soaked, caked in ash everywhere the fire gear didn’t cover. He ate even more quietly than usual, and more often than not leave again to go straight back to the fire front. I don’t remember him coming home or leaving, except at dinner time. I’m pretty sure he didn’t come home at least one night during the worst of the burn. The moment Mum got word that the fire was under control, and everyone was safe, you could feel the relief wash through the house.

Why am I telling you this? Because fire is big, and important, and it’s something that a lot of parents just kind of forget about.

As I write this Chipmunk is sitting next to me with a candle on the ground in front of us, happily blowing it out every time I relight it. She’ll happily do this for half an hour or more, if we have the stamina to keep up with the relighting. She knows which candle is “hers”, knows where the matches are kept, knows where we light candles and where we don’t. She’ll bring us her candle if she wants to blow it out, or if we’re doing work involving candles, so she can “help”.

We didn’t set out to teach her any of this. It’s just happened, as so many things in our lives just happen. Both Raccoon and I perform weekly devotionals to our resident lot of spirits, our ancestors, a couple of lwa, and occasionally a few others as well. Chipmunk sees us lighting candles and incense and naturally wanted to join in. (Right now our house has more altars than people – we burn a lot of candles and incense.) Letting her blow out her own candle is teaching her many things that simply saying “No, don’t do that, we don’t play with fire” never could.

I also remember a time a few years back when Mr 10 was over, just before the start of fire ban season. He was bored, none of the usual suggestions had any appeal. So in half a state of desperation, I told him “there’s a metal garbage can out the back and we have a ton of cardboard and newspaper. Let’s go play with matches.” He went from disbelief at a grown-up saying such a ludicrous thing, to delight and then outright excitement.

I helped him set the garbage can up on the pavers. We filled one bucket with water and one with dirt. Then I showed him how to strike a match safely (away from yourself, near the thing you want to light, make sure no one’s standing in front of you in case the match breaks or the head flicks off), and gave him the box. He happily went through half a box, striking them and letting them fall into the water, while I crumpled newspaper and set some kindling in the bottom of the garbage can.

When I was finished he went to town on the can, lighting things. Watching cardboard flare up. Adding more paper just as it started to go out. Dumping water on and starting again. Dumping dirt on. Lighting more matches. He spent a good three hours in our backyard that afternoon, learning about fire and having a blast. It was the best four boxes of matches we’ve ever used.

I would argue that telling kids not to play with fire is about as useful as telling teenagers not to have sex. They’re probably going to do it anyway, and if you’ve never bothered to talk with them about it, they probably won’t pick a safe experience. Instead, find safe ways to introduce your kids to fire. Let them play with it under supervision. Show them how to build a fire. Light candles. Light matches. Take away the forbidden fruit, and replace it with experimentation, wonder, and delight.